a pinch of madness
the insane notions of a poet, sorcerer,
a singer of peculiar songs,
the rhythmic, vain ideations of one
who conjured strange creatures
from the cauldron of creation

over and beyond this threshold,
you partake of the leisures of sound and sultry syllable
lessons and lectures and laughters
and the lesions of wounded minds,
weary with the weight of life
and giddy with the youthful joys of the coil-sprung death instrument
called cosmos and its temporal, jittery stasis

tune in to the mad frequency of the hatter's harp
feel the feathery quill between your fingers,
scratching the soft illusions of underworld cathedrals
onto the digital parchment of binary scrolls
and into the thousand, orb-like eyes of the argus

place your hand into a nebulous, darkened grab bag
of glasslike candies and venomous serpents

here, you will know not the quilted comforts of certainty
but only the gambler's thrill, that of wanton abandon
mercurial mirth whispered in your ear

words walk here... like men...
men who speak lessons,
instructions in the summoning of demons,
demons who cut doorways in the daylight,
doors through which only angels may pass,
these angels enter into the earth and make oddly-perfumed flowers,
flowers that bloom children under the cold rocks of winter,
children who spend their time slaughtering gods for sport,
beautiful, terrible gods that bleed dying stars,
stars that used their last, tortured breaths…
to spit the dust and the light 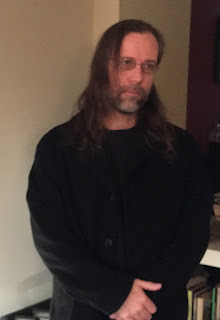 by Kevin Trent Boswell (aka Magus)

Indie On The Move http://www.indieonthemove.com/user/Magus